Are you a victim of a hit-and-run accident? 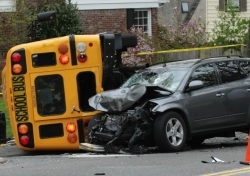 Leaving the scene of an accident, aka hit-and-run accidents, is illegal in every state of the union and yet it continues to occur all too frequently. Statistics have shown that most hit-and-run accidents are the result of the offending driver being intoxicated citing their fear of being charged with DUI.

Just recently, a Newport, New Hampshire man was seriously injured in a hit-and-run accident when crossing the street in the middle of the cross walk. The driver fled the scene but turned himself into the police twenty minutes later because of a guilty conscience. He admitted he had six drinks at a local restaurant before going to work.

What kinds of hit-and-run accidents are there?

Hit-and-run accidents all have one thing in common – the wrongdoer leaves the scene of the accident to escape responsibility. Shoppers sometimes come out of a store only to find their car has been hit by some unknown person. The worst accidents, of course, are those involving bodily injury. Hit-and-run accidents have occurred to animals, pedestrians, motorcycle riders, car and truck drivers, bicyclers, and worst of all, children.

What are the penalties for hit-and-run drivers in New Hampshire?

There are very specific hit-and-run laws in New Hampshire regarding what is to be done when an accident occurs. New Hampshire Statute 264:25 clearly states that people involved in an accident must stop their vehicle and give the injured party their name, address, driver's license number, registration number of the vehicle and the name and address of each occupant in the tortfeasor's vehicle. If a police officer arriving at the scene writes an accident report, the need for the above is negated.

Any person failing to obey this law and who leaves the scene of an accident and is eventually apprehended will face hit and run charges of a misdemeanor or a felony, depending upon the circumstances, and can incur fines, probation or prison time.

Further consequences for the hit-and-run driver

In addition to the above-described penalties, a convicted hit-and-run driver is responsible for paying all of the victim's medical expenses, lost wage, property damage and pain and suffering.

Depending upon the severity of the accident, and whether or not the driver is a repeat offender, his or her driver's license can be suspended or revoked. The offending driver's insurance company may increase premiums or drop coverage altogether.

If you, a family member or friend has been injured in a hit-and-run accident, you should immediately contact a personal injury law firm. A personal injury attorney can assist law enforcement officials in apprehending the hit-and-run driver and deal directly with the insurance companies so you won't have to.