In a January 2012 NH Supreme Court case, the Court reviewed the constitutionality of a regulation requiring a permit in a state park for any unusual activities. While the facts of the case seem somewhat absurd, the underlying legal principles are very important.

In September 2009, Jonathan Doyle decided to dress up as Bigfoot and walk around Mount Monadnock State Park to see how people would react to his costume. While walking around, he filmed some of his interactions with hikers and other park-goers. Doyle reported that people enjoyed his antics in the Bigfoot costume. 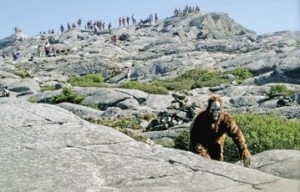 Jonathan Doyle plays the part of Bigfoot in this Sept. 6, 2009, photo taken in Jaffrey. Doyle, an amateur filmmaker dressed as Bigfoot and filmed part of a movie atop Mt. Monadnock in 2009, but when he and his small crew returned to shoot additional scenes they were denied access because they hadn't applied for a $100 special use permit 30 days in advance. Doyle is taking his First Amendment case to the New Hampshire Supreme Court. – AP

Doyle returned to Mount Monadnock State Park the following week, and began filming a skit, showing Bigfoot approaching a man from behind. At that point, he was approached by a park ranger inquiring as to whether Doyle had a “special use permit.” New Hampshire law requires anyone holding organized or special events that go beyond routine recreational activities.

To obtain a permit, Doyle would have to apply at least thirty days prior to the event, pay a $100 fee and obtain a $2 million insurance policy that protects the state of New Hampshire. When Doyle informed the park ranger that he did not have the required permit, he was asked to leave the park.

Rather than simply walk away, Doyle decided to file a lawsuit with the help of the New Hampshire Civil Liberties Union. Doyle challenged the permit requirement as a violation of the New Hampshire and United States Constitutions. Specifically, Doyle claimed that the permit requirement violated his right to free speech. Under NH Supreme Court precedent, the government can only punish Doyle's speech if the restriction was narrowly tailored to protect a specific government interest.

In terms of people, the regulation applies no matter what the size of the group may be. This is problematic, because permit requirements for small groups are nearly always overly broad. Relating to speech, the regulation essentially prevents a wide range of speech that is not related, in any way, to the state's significant interests. In other words, the regulation would require even a small group that would cause little, if any, disturbance to park visitors.

In addition, the regulation needlessly stifles political speech, which is one of the most protected forms of speech. The Supreme Court's decision used the example of three people supporting a political candidate that wanted to walk around the mountain's summit with campaign signs. In that example, the three people would be required to obtain a permit.

The Court concluded that requiring a permit for such an event is wholly unnecessary, because a group of three people carrying signs will hardly burden park resources and will not likely cause unwelcome or unwarranted annoyance.