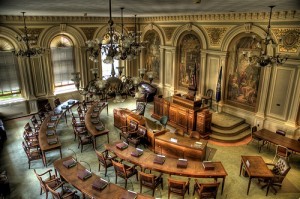 In February we featured an article Murder in Connection with Burglary: A Capital Crime. The article discussed a bill New Hampshire was considering that would allow for capital punishment for anyone convicted of a home invasion or burglary that resulted in murder.

The bill stirred much controversy among State politicians with some claiming it would create a snowball effect for other cases and it could apply to other types of crimes.

Today the NH Senate approved the bill that will extend the death penalty to those charged with murder in connection with a burglary.  The bill will be sent back to the House and is expected to pass.

A gruesome murder in the town of Mont Vernon prompted House Speaker William O'Brien to sponsor the bill. Although some argue this could not have prevented the horrible attack, they are glad that it will be extended to crimes committed in businesses as well as residential homes.

Once the bill is finalized in the House, it will be imperative for any person charged with this type of crime to consult or hire a top New Hampshire Criminal Defense Attorney.