Dealing with a DWI Accident 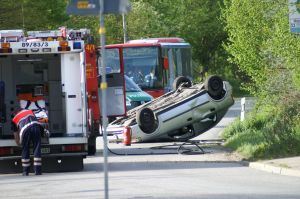 Regardless of the term used, DWI is considered the most serious driving offense in almost all states.

Statistics show that 30% of all traffic fatalities have been caused by drunk driving.  For this reason, legislators have introduced serious consequences, such as high fines and imprisonment, to serve as a deterrent to vehicle operators.

To be successful with a DWI charge, the prosecution needs to show that a driver actually drove the vehicle and was under the influence of an alcoholic beverage, drugs or a combination of both during the act of steering or controlling the vehicle.

Defendants could argue the lack of either one of the elements.  For instance, the driver could say that one of the passengers drove the car and they switched seats right before the police came.  Another common defense would be the lack of intoxication.

In the absence of proof of the driver's BAC level, defendants could argue that even though he was drinking on the day of the accident, alcohol left his bloodstream already; thus, the alcohol content in his blood does not meet the requirement for a DWI charge.

Sudden-death claims are primarily based on the circumstance that a collision that resulted from drunk driving was the direct cause of the fatality.

Eventual death, on the other hand, focuses on the connection between the subsequent death of a participant in a collision and the act of drunk driving.

Vehicular manslaughter pertains to the drunk-driving offense where intent of the defendant could not be proven.

Lastly, aggravated DUI manslaughter is based on the findings of high BAC level and a prior criminal charge which could include a DUI charge in the past.

In a recent New Hampshire DWI case, 26-year old Gregory Auer was charged with aggravated DWI after failing the Field Sobriety Test.  Since the police found a significant amount of narcotic drugs in his vehicle, he was also charged with possession of narcotics and the intent to distribute drugs without prescription.  Further, due to serious body injury caused by the accident, his DWI offense could be considered by the court as a felony.

Representation by a Drunk-Driving Attorney

In cases where fatalities, serious injuries or a prior criminal conviction are involved, the defendant is encouraged to hire a drunk-driving lawyer to prepare the defense and represent him in court.

If he cannot afford to pay the legal fees, a judge may appoint an attorney for him.  Either way, the defendant should at least consult a legal expert to explain what his options are before appearing in court.

In the aforementioned case of Gregory Auer, consulting a New Hampshire accident lawyer could be crucial for his defense since he is facing multiple charges including felony.  Legal representation might help in obtaining a discharge or sentence reduction.