The Difficulty In Detecting Drugged Driving

In a typical DUI or DWI stop, the police officer simply has to give the driver a breathalyzer test to determine whether or not they are over the legal limit—if they are a NH DWI conviction might follow.

Matters are far more complication when it comes to controlled substances beyond alcohol. But with a recent law signed by Governor John Lynch, including prescription and over-the-counter drugs into New Hampshire DUI law, drugged driving will start to receive more scrutiny.

The biggest problem with the crackdown is that it is more difficult to detect a drugged driver. Police officers do not have any equivalent to a breathalyzer test for suspected drugged drivers. There simply is no way to test a suspected drugged driver on the spot during the traffic stop. Police officers are left to use guesswork and conjecture to determine whether the driver is under the influence of drugs or simply anxious at the idea of being pulled over. For this reason, those faces charges while driving while intoxicated by drugs should ensure to vigorously fight the charges. A drugged driving conviction can only come when the prosecutors prove the elements beyond a reasonable doubt—conjecture and guesswork or insufficient. 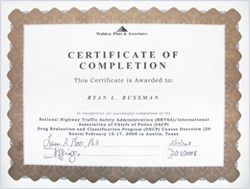 While New Hampshire police have specially trained Drug Recognition Experts (DREs) to look for signs of drug impairment, they are not medical professionals and are still essentially making an educated guess. To become a DRE a police officer must generally compete two days of preliminary classroom training, seven days of DRE school and complete twelve on-site DRE evaluations. The certification lasts two years, and requires classroom training and evaluations to re-certify

Typically, if a driver is suspected of being under the influence of drugs, they are arrested and given a drug test. There are five main types of drug testing that can be performed: urine, blood, hair, saliva and sweat.

Urine testing can detect most drugs within a set time period. Blood testing is more accurate but more expensive and has a shorter period of detectabillity. Hair tests can accurately test for the presence of substances for the longest amount of time. Saliva is easy to test but cannot detect all substances. Sweat can detect the presence of drugs for longer periods of time than blood or saliva, but it cannot recognize as many substances.

While a drug test can accurately detect the presence and the amount of drugs in a person's system, it is not as effective as it seems. Drugs often stay in the body for days, or even weeks. A blood test may detect a drug taken days before the traffic stop, long after it is affecting the driver.

In addition, research has indicated that the link between the amount of drugs in a person's body and their level of impairment are not as clear as one would think. The research into drug impairment is extremely limited, because researchers cannot ethically administer the doses of drugs taken by regular users. In addition, there is difficulty in determining the effects of combining drugs or combining drugs and alcohol. The U.S. Department of Transportation and the U.S. Department of Justice have both admitted that drug tests only detect drugs, they do not detect impairment.

All of this is an important reminder of the benefit of challenged New Hampshire DUI charges and DWI charges to avoid a drugged driving conviction.