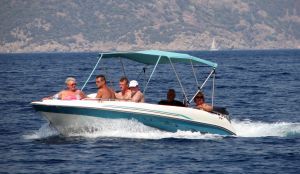 Summer is coming and each year, thousands of people enjoy boating on the New Hampshire waters. While it is still legal to have alcoholic beverages on your boat, it is illegal for anyone to be “boating while intoxicated” (BWI).

What Does BWI Mean?

According to the New Hampshire Handbook of Boating Laws & Responsibilities, boating while intoxicated means that if you're “operating any vessel while under the influence of alcohol, controlled drugs, or any combination of alcohol and controlled drugs,” then you're breaking the law.

The law defines a “vessel” as any watercraft “propelled by a motor or sail,” and it includes canoes and kayaks. In other words, if you're in control of any watercraft, it is illegal to be under the influence of alcohol and/or any other controlled substance.

You should be aware of the serious penalties associated with a BWI charge. After all, the United States Department of Transportation published statistics that suggest a marked increase in BWI accidents in the last decades.

How Does New Hampshire Law Determine if You're Boating Under the Influence?

New Hampshire BWI law works a lot like the DWI law in our state. Here are the key conditions under which you are boating under the influence:

Keep in mind that the effects of alcohol often can be magnified when you've been under the sun for an extended period of time. And, it's important to know that you've already consented to a sobriety test if you're operating a boat. According to New Hampshire law, “by operating a vessel on New Hampshire waters,” you have already agreed to be tested if a law enforcement officer requests it. If you refuse, that's actually a separate offense, and the fact of your refusal can be used against you as evidence in both civil and criminal actions.

What Are the Penalties If I'm Found Guilty of  BWI?

If you're convicted of a boasting while intoxicated, you will subject to a number of penalties. These include:

Yes, you read that correctly. If you're convicted of a BWI in New Hampshire, you can lose your motor vehicle driving privileges.

There are also additional penalties that you should be aware of. If you're convicted while transporting any person under age sixteen, you'll be required by law to complete a seven-day residential intervention program at your own expense, in addition to the penalties noted above.

As well, if you're convicted of a subsequent BWI or DWI offense in New Hampshire, you'll face more serious penalties than you would have without the first conviction.

And keep in mind, if a BWI charge causes the death of someone else, you can be charged with a felony.

The New Hampshire Tour Guide recently ran an article that reminded its readers of a serious BWI-related accident on Lake Winnipesaukee in 2008, which led to the death of a passenger and the incarceration of the convicted driver.

Be safe while operating vessels on the New Hampshire waters. If you are charged with a BWI, you'll need an experienced and skilled defense attorney to help with your case.