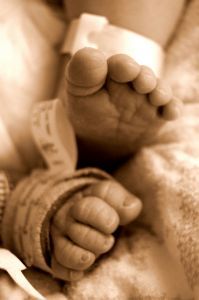 One of a parent's worst nightmares is discovering that their child's birth injury or defect was preventable. Although accidents do happen, physicians, nurses, and other health care providers involved in the birth of a child are expected to adhere to a certain standard of competence.

Studies indicate that birth injuries occur in about 7 of every 1,000 births in the U.S. The injuries can occur as a result of the mother's illness, drug or alcohol use, preexisting condition such as diabetes, reaction to medications, complications during labor or delivery, or from the negligence of the physician, nurse or facility.

In some instances, an incomplete medical history or examination of the pregnant mother may fail to diagnose a condition, such as gestational diabetes, which can lead to severe birth defects.

Some of the more common preventable birth injuries include:

Oxygen deprivation can occur as a result of compression by the umbilical cord, a ruptured blood vessel, respiratory failure, or other factors that a trained and competent staff should be able to detect in time. Should emergency measures like a cesarean procedure be delayed, the child may be saved but may have been deprived of oxygen for a sustained time. This can result in cerebral palsy, mental retardation, or other developmental problems.

This is a permanent, neurological condition caused by the lack of enough oxygen to the fetus, or from the improper use of forceps or vacuum extractors to induce delivery. A child born with this condition exhibits various degrees of a lack of nerve and muscle control, or exaggerated reflex movements. Although early intervention can help a child overcome many obstacles, the condition is not curable.

Depending on the severity of the condition, a child could also sustain hearing or vision loss, be incapable of speech, and have serious cognitive and developmental disabilities.

One cause of cerebral palsy is failure to diagnose a bacterial infection or inflammation of the umbilical cord. A condition called chorioamnionitis, a uterus infection, can significantly increase the risk of the fetus developing cerebral palsy.
Many cases of cerebral palsy are preventable and are due to a lack of supervision, poor training of staff, inadequate functioning equipment, and a failure to monitor or to detect distress in the mother or fetus.

Erb's palsy is also known as a brachial plexus injury since it involves damage to the five nerves in the shoulder or brachial plexus area that control the movements from the spinal cord to the arm, hand and shoulder.

During a breech delivery, or where the child is delivered feet first, or other complicating factors in a delivery, the physician may pull on the baby's arm, unduly stretching the nerves and in some cases severing the nerve root from the spine, called a complete avulsion. An incomplete avulsion is where the nerve is damaged, but the prognosis for recovery or for minimal damage is improved.

Surgery is usually recommended, but a complete avulsion injury will generally result in permanent damage.

Prolonged labor can also increase the risk of a birth injury. When the mother's water breaks, delivery should take place within 24 hours. A delay could lead to brain damage to the fetus.

Other circumstances include a sudden cutoff of the fetal blood supply from circulatory problems, or a separation of the fetus from the uterine wall that may also reduce or cut off oxygen and blood.

Increased glucose levels can occur during prolonged labor and can result in brain trauma to the fetus if the baby' blood sugar levels are not monitored and managed.

The responsible parties in a birth injury case can include the physician, nurse, anesthesiologist, other attending staff, the medical facility, as well as the manufacturer of any equipment that malfunctioned. You will need a birth injury lawyer to ensure that all necessary parties are included in your claim.

A physician is held to a minimum standard of care and is compared to how a comparable physician practicing or performing under similar conditions and circumstances would have acted. The physician may also be held liable for the acts, or omissions, of nurses, residents, and any staff who participated in the birth process as part of his or her supervisory capacity.

A medical facility can be negligent in having substandard equipment or failing to ensure its safe operation, as well as for training, hiring, and supervising the staff.

Nurses are also held to a standard of care separate from that of the physician. Their duties may be monitoring the mother and fetus and detecting danger signs that need to be communicated to the physician.

The time limit for filing a New Hampshire birth injury claim in Exeter, Portsmouth, and Manchester and in the state of NH generally is three years from the date of the negligent act. For minors under the age of 8, malpractice claims must be filed by their 10th birthday.

The trauma of a birth injury involves many emotions. If your child has a birth defect or injury that you suspect could have been prevented, you need the knowledge and skill of a legal professional particularly a Birth Injury Lawyer who has handled such cases.

It is essential that you contact a New Hampshire birth injury lawyer, such as Ryan Russman, whose office both in Exeter and Portsmouth has the experience and litigation skills required in these very complex cases.

His office will obtain the necessary hospital records and conduct a thorough review with the assistance of medical experts to detect any medical errors or omissions that could have prevented the injury, and will pursue litigation if necessary. Contact Ryan Russman today for a free consultation.