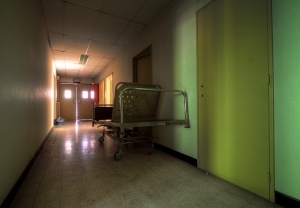 Mark Lufkin, a homeless man from Concord was initially thought to have died from injuries sustained in a brutal attack, however police and the medical examiner say no sign of blunt trauma is evident, and investigations will continue.

Last month, Lufkin was reportedly attacked at a homeless camp while he was attempting to protect a young woman. Another person staying at the camp used a board to beat the attacker. Paramedics arrived at the scene after someone called 911. Rescuers found Lufkin “breathing but unconscious.” He was transported to Concord Hospital and then flown to Dartmouth-Hitchcock Hospital, where he diagnosed to have sustained a possible traumatic brain injury. Lufkin died later that same day.

Concord Police Lt. Time O'Malley told the Concord Monitor that despite reports of a vicious attack,

“There were no indications visible on him that would have led them to believe he had been recently beaten. It doesn't mean he wasn't. It just means there was nothing [paramedics] saw that would indicate that at that time. They had no real explanation for his condition.”

O'Malley said the police are not treating Lufkin's death as a homicide as of yet. He also stated that the New Hampshire attorney general's office would become involved if investigations found evidence of a homicide.

“Mark had a gift. He was very intelligent. He had very good street smarts and a way with words….he wanted to help people…he was always out there helping people.”

Beaupre said the family believes Lufkin was murdered and that they would not stop looking into what might have happened until his case is resolved.

Following his death, the New Hampshire Medical Examiner's Office took possession of the body to perform an autopsy, however the results have not been released.

The Concord NH Patch released news updates regarding the death of Lufkin and reports by individuals from the homeless community and family members who all alleged Lufkin was brutally attacked under the I-393 overpass. Though the police told the Concord Monitor that the case still had “unfilled voids,” they say they are not sure the head trauma was the results of a wrongdoing.

State and local officials have been removing people from the homeless camps located in the city, and continue to patrol the areas. The camps have been the focus of attention for a while after several people drowned in the Merrimack River and a number of violent assaults occurred. Despite this, Lufkin may have chosen to live in the camps over living with family.

Beaupre told reporters that Lufkin “always had a home with us. But Mark always felt as if he had a purpose out there … he was spreading the word of God, with his music. I knew one day I would find him … we would be burying him … but in my wildest dreams I never would have believed that someone (from the homeless community) would have done this to him. Everyone loved Mark.”