I have serious issues with the validity of field sobriety tests. I have many questions as to whether the standard field sobriety tests are truly designed to determine evidence of impairment by alcohol, or if they simply determine if the subject is just poorly coordinated and/or cannot follow multi-task instructions. Let's look at the Walk-And-Turn (WAT) test, for example.

The following explanation of this test comes from the National Highway Traffic and Safety Administration page on Standardized Field Sobriety Testing.

The Walk-and-Turn test and One-Leg Stand test are “divided attention” tests that are easily performed by most unimpaired people. They require a suspect to listen to and follow instructions while performing simple physical movements. Impaired persons have difficulty with tasks requiring their attention to be divided between simple mental and physical exercises.

In the Walk-and-Turn test, the subject is directed to take nine steps, heel-to-toe, along a straight line. After taking the steps, the suspect must turn on one foot and return in the same manner in the opposite direction. The examiner looks for eight indicators of impairment: if the suspect cannot keep balance while listening to the instructions, begins before the instructions are finished, stops while walking to regain balance, does not touch heel-to-toe, steps off the line, uses arms to balance, makes an improper turn, or takes an incorrect number of steps. NHTSA research indicates that 79 percent of individuals who exhibit two or more indicators in the performance of the test will have a BAC of 0.08 or greater (Stuster and Burns, 1998).

The “Roadside Olympics” Prove Nothing

Someone who has poor balance or is uncoordinated is going to be put at a disadvantage when put through what I commonly refer to as the “Roadside Olympics.”

I look at these field sobriety tests and the research that has been put into developing them, and I see no scientific links between the performance on these tests and the pass and fail rate — outside of what has been reported by police agencies, and this is self-reported. So it's easy for police agencies to manipulate the data and it's easy for them to report that they have administered the test exactly as they were instructed to do.

Against Our Natural Instincts 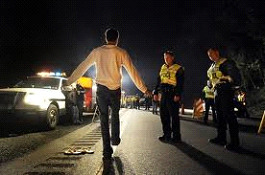 This is just not indicative of what actually happens in the real world. When you put people through a field sobriety test such as the Walk-And-Turn test, we all naturally want to use our arms right away for balance. Even highly conditioned and coordinated Olympic gymnasts will put their arms out to help control their balance when doing an exercise like this. Yet one of the things that a police officer will tell you is not to use your arms for balance.

The police officer will also tell you not to start the test before being instructed to do so. Yet, as social creatures, we want to please the people whom we're trying to impress, and so it's natural to want to start right away to show the officer that you can do this. In fact, if you do that, it's another clue of impairment.

If I asked you to walk along a 2×4” board that was lying on the ground, you would probably have very little difficulty putting one foot in front of the other and doing it. You probably would use your arms for balance. But if I change the scenario just slightly, and I elevate that board just two feet off the ground, the dynamic of that situation has changed considerably.

This change is akin to what this testing might be like in a real world situation. Imagine that a police officer has pulled you over and you are standing out on the side of the road late at night with bright white and flashing lights in your vision. Traffic is blowing by you. You know that you've had something to drink and you feel that “I have to pass” this test. You're nervous. You know that it's not just your driver's license that is at stake, it's everything that's attached to it … your job, your mortgage and your family.

These simple real-world dynamics of the tests– in terms of how, when and where they are conducted–all play a big role in one's performance, yet there is no accounting for any of that.

Even Ph.D. scientist Marcelline Burns, who was a principal party in inventing, researching and supporting the use of field sobriety tests, has testified under oath that there is absolutely no correlation between performance on field sobriety tests and the ability to drive.

Evidence Not Given the Ordinary Weight

As a DUI defense lawyer, I challenge the results of the Walk-And-Turn (WAT) test, and all field sobriety tests, in almost every case. Way too subjective! Far too dependent on each person's unique physical abilities, sense of balance and ability to perform under stress.

Many times, by pointing out these facts in relation to a particular case, I'm able to get the judge and/or jury to agree. Often, the results of the “Roadside Olympics” are not given the weight that they would ordinarily be given. The court will frequently determine that the state does not meet the evidentiary burden and will find my client “Not Guilty”. This is as it should be.